Hypersonic missiles represent the most significant advancement in defense weaponry since the 1960s. However, they also present substantial challenges. The term “hypersonic” describes any speed faster than five times the speed of sound (above Mach 5). In fact, these missiles are so fast that, as they travel, their speed can alter the adjacent air molecules. Compared to ballistic missiles, which are fast but travel along a predictable trajectory, and cruise missiles, which are accurate but slower, hypersonic weapons combine speed and accuracy. In addition, they are low-flying and maneuverable, designed to be nimble enough that traditional missile defense systems cannot detect and react in time.

There are two types: hypersonic glide vehicles (HGVs), also known as boost-glide vehicles, are typically launched from a ballistic missile and released at a specific altitude, speed, and with the flight path tailored to reaching its target without being powered. A small propulsion system could be added to speed arrival at the target and provide directional control.

In contrast, hypersonic cruise missiles (HCMs) are powered all the way to their targets, flying high altitudes but lower than those of HGVs and launched from a rocket or jet aircraft. Power is delivered by air-breathing scramjet engines. Scramjets have been in development since the 1950s and they’ve proven to be extremely difficult to perfect, with the most successful results produced only since the 2000s. The trajectories of both types of weapons are shown in Figure 1. 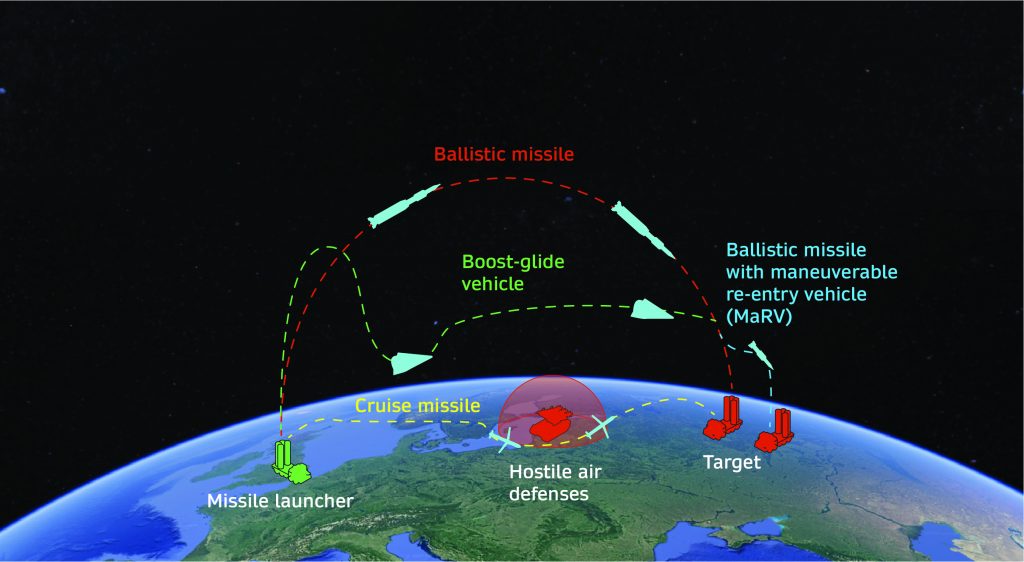 Figure 1: Hypersonic glide vehicles (also known as boost-glide vehicles) are typically launched from a ballistic missile and released at a specific altitude, speed, and with the flight path tailored to reaching its target without being powered. Hypersonic cruise missiles are powered all the way to their targets, flying high altitudes but lower than those of HGVs and launched from a rocket or jet aircraft.

For example, a hypersonic missile utilizes multiple antennas and sensors with phase-matched or time-matched cables. These elements must survive at speeds that can exceed Mach 5, at times topping 5,000 mph. At such speeds, the temperature on the surface and in the boundary layer of the missile may exceed 1,800° F (1000° C).

During its journey, hypersonic missile guidance will reach temperatures ranging from 200° C to as high as 1000° C. This creates a unique material challenge as extreme temperatures will melt the plastics and polymers typically used in coaxial cables.

High-performance dielectrics and phase-matched systems are essential to meet phase versus temperature requirements. A hypersonic missile will go through the top of the atmosphere, generating vast amounts of heat, like a space capsule during re-entry. As the cable moves from cold to very hot temperatures, the phase matching between cables needs to track.

Hence, phase is a crucial parameter for detection and measurement in RF systems that rely on high accuracy continuous transmission and reception of RF signals. RF signals must travel through coaxial cables at consistent speeds regardless of environmental factors. Temperature variations degrade the electrical match between coaxial cable assemblies. That small amount of degradation, known as phase tracking characteristic, can adversely affect system performance.

For example, the electronically steered antenna used in many RF applications employs an array of radiating elements to steer antenna beams rather than physically moving an antenna. Beam steering for transmission or reception is performed by adjusting the phase of the individual antenna elements in the array. High-frequency transmission lines feed each antenna array element. The accuracy of the signal phase presented to each array element depends on the phase accuracy and stability of the cable assemblies. Therefore, cable assemblies optimized for phase performance usually exhibit minimal changes in phase with temperature.

Modern missile systems also utilize extensive communications equipment packed within a highly confined space. This creates a demand for novel solutions that combine a small form factor with reduced weight and rugged construction to withstand the high impact and vibration conditions from deployment to target.

Polytetrafluoroethylene (PTFE) has traditionally been the dielectric material of choice for many high-frequency cables, as it provides excellent flexibility and low loss. However, at +19°C, PTFE exhibits a well-known deviation, commonly referred to as the “knee,” in its phase versus temperature characteristics due to a change in its crystalline state. This abrupt change in phase length at +19° C can generate inaccuracies in systems that use phase as a measurement parameter.

These inaccuracies, though slight, can lead to much larger, crucial issues; any variations in the electrical behavior of RF/microwave coaxial cable assemblies can introduce amplitude and phase variations that degrade the performance of a phased-array radar system overall.

Hypersonic missile systems cannot tolerate phase errors, so cable designers must consider other materials that do not present the same shortcomings as PTFE. Times Microwave Systems developed a proprietary silicon dioxide dielectric (SiO2) to address these unique challenges (Figure 2). Silicon dioxide is well known in the microelectronics industry for its excellent insulating properties.

The SiO2 construction starts with a solid oxygen-free copper center conductor, a silicon dioxide insulating dielectric, and a stainless steel jacket with copper cladding to act as the outer conductor. Low loss, high-velocity silicon dioxide dielectrics excel in extreme environments as they provide excellent phase stability and can perform at extreme temperatures ranging from just above absolute zero to 1000° C. In addition, compared to other cable types, SiO2 cables provide exceptionally low hysteresis, with phase and loss returning to the same values at a given temperature even after extreme excursions.

The metal and silicon dioxide dielectric construction make the cable resist radiation naturally, up to 100 Mrads. All connectors for Times’ SiO2 cable assemblies employ a crack-free, fired glass seal to provide the optimum microwave performance. The stainless steel jacket is welded to the connectors with laser beam technology to create a hermetic seal.

Hypersonic weapons have been a hot topic in the news lately. Please give us some background on hypersonics and what all the buzz is about.

Hypersonic technologies are not new; however, they have been around for 70 years or so since the end of World War II. Examples include Sputnik, the Apollo missions, SpaceX rockets, etc. What they all had in common is that they have a ballistic path, a parabolic arc set by the force of gravity and launch velocity. The path is very predictable, and it is easy to determine where the vehicle came from, where it’s going to land, etc., so it’s easy to defend against and countermeasure.

The difference today is that the new generation of hypersonic vehicles is steerable. This makes it challenging to determine precisely where it came from, which is a game changer. The weapon system that is getting the most attention right now is hypersonic glide vehicles. These are initially launched on a parabolic or ballistic arc but can drop down much lower in altitude mid-course and “glide” at a relatively low atmosphere at hypersonic speeds. As a result, they are much more challenging to detect.

Not only are these missiles traveling at hypersonic speeds, but they are also maneuverable. As a result, the time to react could be as little as two-three minutes compared to 45 minutes or an hour with other missile types, so they are very difficult to defend against. Additionally, there are hypersonic cruise missiles, powered vehicles with a scramjet or a supersonic ram jet. That is another game changer because it can travel at much lower altitudes at much longer ranges and is powered, so it’s not just gliding.

Given the physics associated with hypersonic speeds and the extreme environmental conditions, what kind of challenges or emerging technologies have hypersonics created?

The maneuverability factor is the primary issue when it comes to electronics. Every time the missile maneuvers, it loses energy, which is then dissipated as heat. This is in addition to the heat caused by the friction of slipping through the air stream. Dealing with that heat is one of the significant technical challenges.

Smart weapons are also precise and accurate, usually requiring someone on the ground to identify a target, communicate with the weapon, and guide it at hypersonic speeds. These vehicles are surrounded by a plasma envelope, which is why space vehicles lose communications for a few seconds on re-entry because the envelope shields them from communications. Penetrating the plasma envelope to communicate with the weapon and steer it creates another big technological hurdle. This drives the need to evaluate smaller, lighter options that can operate at higher temperatures.

Do you have a sense of the market evolving over the next few years as research and development turn into actual fielded programs?

The armed services and government development agencies rely on industry to develop these weapons, components, and underlying technologies. As a result, a lot of investment will flood into this space because it is the department of defense’s number one development priority right now and will likely continue to be a top priority for at least the next ten years.