In our continuing pursuit for excellence, Times Microwave Systems has developed the Phase Track® line of phase stable, low loss cable products. These products are designed for use on many application platforms, but are particularly well suited for thermal vacuum test and space flight cable requirements. These cables incorporate a revolutionary new dielectric composition that eliminates the infamous non-linear “knee” exhibited by Polytetrafluoroethylene (PTFE) based dielectrics. A brief summary of the history of cable dielectric materials will further illustrate this dramatic breakthrough in microwave transmission line technology.

The major application of PTFE, consuming about 50% of production, is for wiring in aerospace and computer applications, e.g. hookup wire, coaxial cables. These applications exploit the fact that PTFE has excellent dielectric properties. This is especially true at high radio frequencies, making it suitable for use as an insulator in cables and connector assemblies and as a material for printed circuit boards used at microwave frequencies. Combined with its high melting temperature, this makes it the material of choice as a high-performance substitute for the weaker and lower melting point PE dielectrics, which are commonly used in low-cost applications.

There is one major issue with PTFE based dielectrics; they exhibit an inherent, non-linear change in phase when the material passes through the 15-25º Celsius temperature range. This material hysteresis has caused major issues for phased array radar antenna designers for many years. There have been attempts to minimize this non-linear effect by thermal cycling cables and components, as well as, efforts to introduce other materials to help minimize this condition. One of the more successful efforts was to add glassine materials to the dielectric. This did help to reduce the hysteresis effect, but was not conducive to good electrical performance. The added glass increased the dielectric constant and loss tangent of the material, thereby increasing attenuation. The other
major disadvantage was the effect the glassine materials had on extrusion dies used to produce the material. The cost of manufacturing these materials went up greatly, as the dies used for manufacturing had to be replaced often and the material had to be run at much slower rates.

In the 1970s, an engineer experimenting with cable dielectrics made a significant breakthrough when he took a PTFE rod, heated it and stretched it. The stretching process pulled the material apart on a micro-physical level, there- by trapping air between interconnecting fibrils of the PTFE rod. After electrical testing, it was apparent that the air had lowered the dielectric constant and a new, low density PTFE dielectric was discovered. This low density material lowered attenuation, increased the velocity of propagation, power handling and allowed for smaller transmission lines. These were all very significant factors in moving to the next level in coaxial cable performance. However, one aspect does not change, the non-linear phase characteristics of the dielectric. It was better than the solid,
sintered performance of the original PTFE compositions, but the non-linear phase change, although some- what smaller, is still present.

There have been other breakthroughs in dielectric science utilizing Silicone Dioxide (SiO2) materials that have greater thermal capabilities than PTFE and do not exhibit the non-linear performance in phase, but have other serious concerns. The SiO2 product, like the old paper dielectrics are very susceptible to moisture ingression, with serious absorption qualities and must be encapsulated within a completely hermetic cable system. This requires the use of semi-rigid outer conductors that requires special bending dies The SiO2 cables are very well suited to very severe environments, such as extreme heat and radioactive applications, but are not practical, or economical for the bulk of microwave applications that require flexible cables.

Many companies, including TMS have utilized Polyethylene (PE) for dielectric cores in coaxial cables, as it does not exhibit the phase hysteresis effect that PTFE does. It is a low temperature dielectric by comparison and does not yield many of the overall benefits that PTFE does for high temperature and electrical performance. There have been many attempts to improve the PE electrical characteristics by injecting air, or gas during the extrusion process to lower the dielectric constant and achieve better attenuation performance, but one detail always remains the same, one cannot improve the temperature handling capability of PE. This limits the power handling of the cable and prevents the use of fully soldered connector attachments.

Times Microwave Systems has addressed these issues through a very scientific and detailed process and has made the breakthrough our industry has been waiting for in PTFE based dielectric science. We have achieved a complete “knee replacement” for PTFE. TMS has achieved what was once considered impossible, we have eliminated the non-linear phase performance of PTFE through the 15-25C temperature range. This achievement has been accomplished with- out any detrimental electrical, or mechanical performance degradation. As can be seen in Figure 1, the phase performance of the Times TF4™ dielectric exhibits linear characteristics when compared to the best and typical low density PTFE dielectrics. 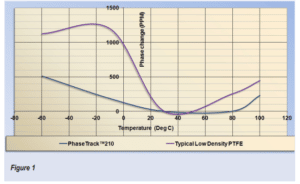 The TF4™ dielectric allows systems and design engineers the luxury of not requiring any extra calibration processing to level the system after thermal changes. This problem is a particular concern
because the change in phase can be simply caused by an air conditioner, or
heating system turning on during, or after the calibration process, thereby introducing potential measurement errors into the calibration setup. In Figure 2, the Phase Track® materials are
detailed. These products can be used for many applications and all utilize the TF4™
dielectric core. This cable design utilizes only the best available materials that
yields the most superior phase versus temperature performance available in a coaxial cable.

It has been noted in several marketing studies that space exploration will continue to exhibit significant growth over the next ten years. In the past, the US and Russia (former Soviet Union) were the only major players in the space market. Today, many countries are now developing robust and tangible space programs. The net result of these global efforts are a significant and growing market for space qualified, flight level, test and measurement cable assemblies.

One of the biggest areas for growth are in test and measurement cable assemblies. These products are necessary for testing components and sub-systems in a vacuum environment before launch to insure proper product adherence in the vacuum environment of space. TMS is producing cable assemblies utilizing its standard microporous dielectric products, as well as, our Phase Track® cables, with our revolutionary TF4™ dielectric material.

TMS has supplied thousands of cable assemblies for space and thermal vacuum applications. The Phase Track® product is currently in use for thermal test cable applications at a wide variety of space related component and system level manufacturers. This test cable product is very phase and amplitude stable and has been designed for the best possible VSWR and attenuation performance. All connector designs incorporate rugged connector bodies and are tuned for optimum electrical performance.

There are several critical aspects of this type of cable assembly. These assemblies must use non-outgassing materials in a vacuum environment and TMS takes great care in selecting only the best avail- able materials to meet this requirement. Most of the TMS products available for vacuum applications utilize a FEP outer jacket, other materials include PVDF (Kynar) and TEFZEL®. See below for outgassing test results for standard materials used by TMS for vacuum environments. It is imperative that no polymeric materials are used for these vacuum requirements, as the standard materials, such as polyolefin, commonly used for heat shrink strain relief systems in cable assemblies will outgas. TMS uses PVDF (Kynar) for strain relief systems.

The above tested materials meet, or exceed all the requirements noted for outgassing per ASTM E595-90 and ESA- PSS-01-792. These materials are listed in the NASA-ESA databases for low outgassing materials acceptable for use in vacuum environments.

Another very important aspect of operating within a vacuum environment is the potential for ionization break- down of the connector dielectric. In most cases, multipactor in a coaxial line is a high power condition in that occurs when the power level reaches the peak power capacity of the component. In fact, the multipaction discharge within a coaxial line is usually not the mode of failure. However, the discharge can vaporize some of the dielectric material within the coaxial line and create ionized gas particles. If the coaxial line is not properly vented, these collected gas particles can initiate an ionization break- down within the structure. The ionization breakdown is the typical mode of failure. TMS designs and manufactures a wide variety of connectors designed to withstand high peak power levels. These connectors are designed with over- lapping dielectrics, see Figure 3, to minimize the potential for ionization breakdown of the dielectric and are vented to allow for the controlled relief of gaseous ionized pressure.

Many space level testing applications may include the cable’s ability to survive in a radiation environment. In this case, TMS will apply the proper external materials on the cable
to withstand a radiation active environment. These cables are protected by multiple
layers of materials that allow for excel- lent microwave operation in the most
difficult and highly radioactive environment. The standard cable jacketing materials
used on coaxial cable, PE, PFA and FEP will not stand up to significant radiation. The best
thermoplastic material for radiation resistance in flexible cables is TEFZEL®, manufactured by DuPont. They produce several grades of this product that have varying degrees of radiation resistance. TMS will also use PVDF (Kynar) for heat shrink strain relief
systems because it also has excellent radiation resistant properties. The cable is
extremely well shielded by multiple layers of silver plated secondary conductors
served over the TF4™ dielectric core.

TMS is currently working with several large satellite manufacturers to supply low loss, phase stable cable assemblies for use on space flight applications. The Phase Track® products are
leading the way in these efforts and provide our customers with the best possible
cable performance available in our industry. All of the above noted
benefits make these assemblies reliable and electrically superior for these very
demanding applications. We have instituted a very robust and disciplined process control
system to manufacture these cable assemblies with the utmost concern for quality and
schedule adherence. TMS understands the need for reliable products, delivered on-
time, with the highest degree of quality control.

The Phase Track® products are also extremely well suited for phased array radar, high power antenna and other applications requiring precise phase stability. Times manufactures a wide variety of cable products with specialized processes that include the extrusion of PTFE and PE in both, sintered and foamed versions. We also manufacture tape wrapped, low density PTFE dielectrics
that have an excellent velocity of propagation, low loss and very high power handling capabilities. These cables incorporate high levels of shielding to prevent intermodulation and have outstanding RF leakage qualities. We want to emphasize that TMS has the largest product selection available in our industry and we have a cable available for any of today’s most demanding microwave applications.