Technical Primer: Using the Proper Connectors Can Be Critical in High-Frequency Applications

Connectors on an RF assembly are often taken for granted. In many cases the designer is satisfied if he has found a connector of the proper interface that will physically fit onto the cable that he intends to use. Impedance uniformity across a cable assembly is paramount in the efficient transmission of RF energy. The cable assembly is basically only as good as its weakest link. The time and money spent on high-quality, low-loss cable can be wasted if there are large impedance mismatches within the connectors, at the connector-cable interface and at the connector-device interface.

The Connector and Wave Reflection

Ideally, the RF connector will have a uniform impedance across its entire electrical path and a VSWR (voltage standing wave ratio) rating of 1.00:1. The VSWR value of a connector is the expression of the percentage of the input signal that is reflected back toward the source due to mismatches within the connector. This VSWR value can also be used to express the percentage of reflections across an entire assembly.

A uniform impedance across the connector, the cable and the connector-cable interface will allow the input signal of an RF transmission line to be efficiently transmitted to the output. In this case, reflections created by impedance mismatches will be nonexistent, and the losses across the assembly length will be strictly a function of the resistance of the conductors, the electrical properties of the dielectric and the shielding of the cable.

The overall insertion loss for an assembly can be determined by calculating the theoretical
attenuation of the assembly and then adding all of the mismatch losses that would be associated with the assembly (i.e. cable, forward connector and aft connector). This calculated value represents a worst-case scenario. It would become reality if the peaks of the incident wave and all of the reflected waves were in phase with each other. This scenario is possible, but unlikely. However,
it is almost certain that the overall insertion loss of the assembly will increase as the reflections caused by mismatches along its length increase.

A perfect connector with a 1.00:1 VSWR is not possible, or I should say, it is not economically
viable. There are line-size transitions that are taking place within the connector. There are many variables involved in optimizing these line-size transitions. An abrupt transition may work well at lower frequencies, but this transition must be compensated when working at higher frequencies.
This is not an exact science. However, experienced connector designers can use time domain reflectometry to map the impedance mismatches across the connector. They can then improve the uniformity of the impedance across the connector. The art in doing this is not simply in finding a way to properly compensate the connector but in doing it in such a way that it can be produced economically. 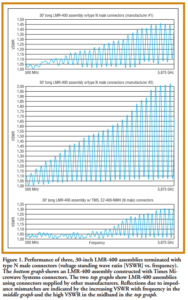 The first thing that comes to mind when looking at these traces in Figure 1 is that the nodes are similarly shaped and very cyclical, indicating that the cable itself has a very uniform impedance. In the event that the cable varied in impedance, the trace would look much more ragged. The VSWR trace of a cable with very poor impedance uniformity would look almost like random noise.

Based on this information and the fact that each of these 30-inch assemblies was made from the same lot of cable, we know that the steadily increasing VSWR with frequency in the middle graph of Figure 1 and the high VSWR in the midband shown in the top graph can be attributed to reflections
due to impedance mismatches within the connectors.

These three curves in Figure 1 demonstrate how the size and material transitions within a particular connector design may be compensated to perform well up to a certain frequency. It is also possible to design a connector that may perform very well in a particular band but reflect a larger percentage of the input signal at frequencies both above and below the designated band.

It gets increasingly difficult with connectors, as with cable, to design, build and maintain the tight process controls that are necessary to achieve a high level of performance over a broad frequency band. It’s especially difficult as the frequencies climb well beyond the 1 GHz level, such as in the
5.8-GHz ISM band. Although it is possible to optimize connectors to perform well in certain bands, it is rarely viable from an economic standpoint.

Most connectors are rated for broadband performance to a specific maximum frequency. Unfortunately, most manufacturers of commercial RF connectors have not been able to keep up with the improvements that would be necessary to obtain reasonably good performance at the 3.7- or 5.8-GHz level, never mind optimal performance.

As little as three years ago, most applications were operating below 1 GHz; as recently as two years ago, most applications for commercial cable and connectors were operating below 2 GHz. It is these cellular and PCS (personal communications service) bands for which most connectors were designed. Someone working in these bands could basically pull any connector off a shelf and it would be a pretty safe bet that the performance would at least be respectable. Most connector manufacturers were slow to understand that a connector that was sufficient in a PCS application at 2 GHz may not meet the requirements for a 2.4 GHz application in the ISM band.
The proliferation of data applications in the ISM bands has placed certain demands on connector performance. These bands are unlicensed, and therefore the Federal Communications Commission has placed power limitations on transmissions in these bands. The need to be assured that there is a
sufficient transmit signal — but at the same time, making sure that the transmit power never exceeds the maximum allowable power — has, in many cases, created a demand for low-loss cable assemblies that are consistent and predictable in performance.

The nature of data transmission itself has also pushed systems to reduce noise levels to their absolute minimum. The best way to do this is to minimize the power levels of the system. Hence, there’s a need for low-loss cable, and, just as importantly, low-loss assemblies. As an added challenge, some of these systems are now operating in the 5.8- GHz band.

A desirable feature to have in any connector, and especially in one that must be field installed, is a captivated pin. The pin may be of a spring-finger design and permanently pressed into the dielectric or it might have a shoulder on it that will make positive contact with the bottom of a counter bore in
the connector dielectric. It’s not a stretch to imagine that the pin height of a connector with a noncaptivated pin, when installed in the field, may be 10 to 20 mils off. This error will create shifts in impedance throughout the connector, especially if there are many diameter transitions in the pin.

There are an enormous number of 50- ohm coaxial cable designs available. The designs encompass standard RG designations, as well as specific requirements that have arisen over the years. These designs have been devised to optimize certain parameters of the cable, such as attenuation, impedance uniformity, velocity, time delay, diameter, bend radius, flexibility, temperature range of operation and weight.

These parameters are optimized by varying center conductor, dielectric, outer conductor, and jacket materials and sizes. Optimization is also accomplished by varying the processes by which the cable is produced. Although most of these cables are 50-ohm cables, many of them present their own unique physical considerations when they are terminated with a connector.

Times Microwave Systems makes a variety of 50-ohm coaxial cables, more than any other manufacturer. The product line includes RG cables and the LMR line of low-loss flexible cable that is widely used in telecommunications and has become the accepted standard for wireless data.

There are an enormous number of connector interfaces that are in use today.
However, in wireless communications more often than not, we find ourselves working
with SMAs, TNCs, Ns or 7/16 DINs. The need for economic solutions in the development
of wireless infrastructure requires us to use the smallest diameter cable that will keep us within our loss budget and meet any other requirements that the system will place on the cable.

Factoring in the need to work with the smallest cable available, it can be quite a task to find the ideal connector for a particular cable. Considerations include the variety of cable designs, the number of connector interfaces that are dealt with, and issues such as gender, straight or right angle, clamp or
crimp, connector material and plating. Additionally, most cable manufacturers do not design or build connectors, and most connector manufacturers do not design or build cable. Hence, a certain level of frustration can be expected.
For purposes of discussion, we will assume that we are working with cable that has a uniform, 50-ohm impedance. Also, we assume that our connectors have a uniform impedance across their length (including the compensation necessary to carry out the line-size transition from the interface to the
core diameter that is being considered). At this point, the most important consideration is the mechanical fit between the transfer body of the connector (the effective outer conductor) and the outer conductor or shield of the cable itself. Ideally, this interface will be smooth and mechanically intimate around the entire 360-degree circumference of the connector.

Some connectors are designed to snugly fit over the outer shield of a cable. Other connectors are designed to fit snugly over the dielectric and have the shield or outer conductor crimped or clamped to the outer surface of the transfer body of the connector. In any case, the inner diameter of the
outer conductor must be maintained as best as possible when making the cable-connector
transition, and this transition must be mechanically sound. It doesn’t do any good to have an assembly that will perform reasonably well on a workbench but deteriorates quickly when exposed to real-life situations such as wind, vibration and temperature shifts.

As the frequencies of new applications continue to rise and performance requirements
become increasingly demanding, the connector must be looked at closely. Factors include the mechanical variables that will affect overall electrical performance, performance
under extreme conditions and the long-term ability to withstand the environment. Also, each connector has its own impedance characteristics similar to a fingerprint. Various connector designs will be associated with different VSWR values at a given frequency, and, in some cases, may have a significant impact on the overall insertion loss of a microwave assembly.